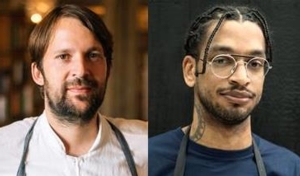 René Redzepi and David Zilber | The Noma Guide to Fermentation

René Redzepi is chef and co-owner of Copenhagen’s Michelin two-star restaurant Noma, recognized an astounding four times as the best in the world. He is one of Time’s 100 Most Influential People in the World and the subject of two full-length documentaries. His book Noma: Time and Place in Nordic Cuisine—“an international sensation” (New York Times)—won International Association of Culinary Professionals (IACP) and James Beard awards. Former sous-chef at Vancouver’s Hawksworth Restaurant, David Zilber has worked at Noma since 2014 and has overseen its famous fermentation lab since 2016. In their new how-to guide, Redzepi and Zilber reveal the techniques used at Noma to bring fermented ingredients to every dish served.

This is a book with ticket event. You may collect your book when you enter the auditorium.