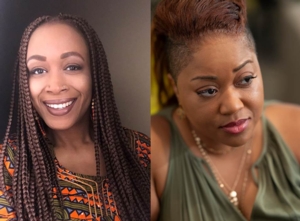 Feminista Jones | Reclaiming Our Space: How Black Feminists Are Changing the World from the Tweets to the Streets with DaMaris B. Hill | A Bound Woman is a Dangerous Thing

Social worker, public speaker, community activist, and blogger Feminista Jones is the author of the novel Push the Button and the poetry collection The Secret of Sugar Water. She was named one of the 100 Most Influential People in Philadelphia (Philadelphia Magazine)  and one of The Root’s Top 100 Black Social Influencers. Her articles have appeared in a variety of periodicals, including the New York Times, Ebony, Time, and Essence. In Reclaiming Our Space, Jones examines the ways black women are using digital spaces to change the conventional dialogues of culture and social movements.

DaMaris B. Hill is the author of The Fluid Boundaries of Suffrage, Jim Crow: Staking Claims, and the poetry collection Vi-ze-bel\Teks-chers. A double PhD in English and women and gender studies, she teaches creative writing and African American and Africana studies at the University of Kentucky. In A Bound Woman is a Dangerous Thing: The Incarceration of African American Women from Harriet Tubman to Sandra Bland, Hill evokes some of the most powerful incarcerated American women of color—from Assata Shakur to Zora Neale Hurston—to present an unflinching, unbridled celebration of struggle and transcendence.

6:00 P.M.
Empathy Versus Misinformation: On the Topic of Transgender Youth