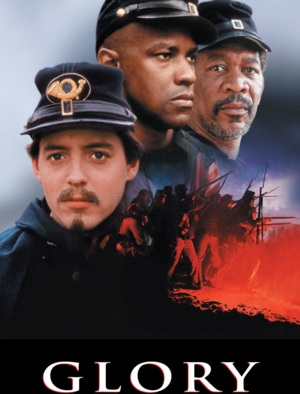 Central Senior Services joins the Free Library's Community Fair and continues in celebration of Black History with a screening of the critically acclaimed "Glory".

Nominated for five Academy Awards, the now almost three decades old Glory still delivers unparalleled excitement and authenticity in the telling of one of America’s greatest stories; and it shares a theme with two currently celebrated Free Library exhibits:Philadelphia: The Changing City and At These Crossroads: The Legacies of Frederick Douglass and W.E.B. Du Bois.  The star-studded cast includes Oscar-winner Denzel Washington, Matthew Broderick, and Morgan Freeman. This event is free and open to the public. All are welcome. Parental discretion is advised. Not suitable for young children.

In this epic saga of the United States' first all-African-American regiment the 54th Massachusetts Volunteer Infantry insists upon being placed in the heat of the battle and proudly and valiantly fights in the Union Army during the US Civil War. Glory is an unforgettable history lesson about soldiers who transcended the profound racism and ignorance of their time to find dignity, courage, valor, and self-respect against all odds.

Philadelphia: The Changing City - 11,000 Black soldier were trained in Philadelphia during the Civil War as Philadelphia’s Camp William Penn was the first training ground for African American soldiers in the Union Army.

At These Crossroads: The Legacies of Frederick Douglass and W.E.B. Du Bois - At the start of the Civil War it was Frederick Douglass who convinced President Lincoln to let Black men enlist. In fact Douglass’ sons Charles and Lewis both enlisted and Lewis Douglass fought with the Historic 54th Massachusetts Volunteer Infantry depicted in Glory.

Frederick Douglass wrote the Broadside used by the US Government to recruit men of color into the Union Army.

10:00 A.M.
Staying On: When An Elderly or Ill U.S. Senator Refuses To Retire | This is a Zoom program sponsored by Central Senior Services