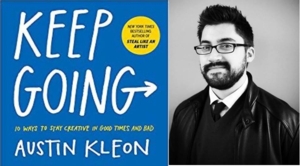 "I’m a writer who draws. I make art with words and books with pictures."

Join New York Times bestselling author Austin Kleon as he launches his new book, Keep Going, a guide to staying creative in good times and bad. Kleon's books, including Steal Like An Artist and Show Your Work have over a million copies in print, and he speaks about creativity in the digital age for organizations like Pixar, Google, and TEDx.

New York Magazine called his work “brilliant," while The Atlantic describes him as “positively one of the most interesting people on the Internet." See him in person, in conversation with theater artist Davey Strattan.

This free event, hosted by Kensington Neighborhood Library, is in collaboration with Philadelphia Brewing Company and Commonwealth Ciders.

Books will be on sale by Head House Books.

7:30 P.M.
IN-PERSON - Yiyun Li | The Book of Goose with Elizabeth McCracken | The Hero of this Book | Parkway Central Library