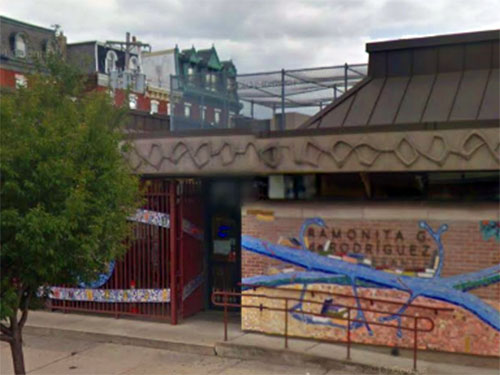 Located on Girard Avenue, this branch was known as the Girard Avenue Branch until 1977, when it was named for an educator and community leader. The branch serves the communities of Olde Kensington, Kensington South, Ludlow, Yorktown, East and West Poplar, Northern Liberties, and Girard/Poplar.

The neighborhood of Northern Liberties dates from the 1860s. To encourage settlement, William Penn gave those who purchased a lot of land within the city limits (north of Spring Garden Street) a free property in the "Liberty Lands," the wilderness to the north. The district was incorporated into the city of Philadelphia in 1854.

Girard Avenue's story began when the wealthiest man in America, Stephen Girard, decided to make a new street. According to his 1830 vision, the street would be lined with mansions. However, as the city's population grew, Girard Avenue became the city's “"second Market Street,"” with four covered markets.

Ramonita G. de Rodriguez library opened for business as the Girard Avenue Branch on December 16, 1968. The City Council renamed the branch on May 27, 1977 to honor the memory of Ramonita G. de Rodriguez. Rodriguez was an outstanding Puerto Rican educator and community leader who served with the School District of Philadelphia as a supervisor in the Bilingual Program.

The library was renovated in 1996 as part of the “"Changing Lives"” campaign, which refurbished branches and ensured Internet access. As part of the Girard Avenue Coalition's effort to revitalize the street, The Mural Arts Program of the City of Philadelphia has created a colorful mural for the library's exterior. You might also notice the abstract relief sculpture on the concrete fascia encircling the building, which was crafted by sculptor Joseph J. Greenberg, Jr.