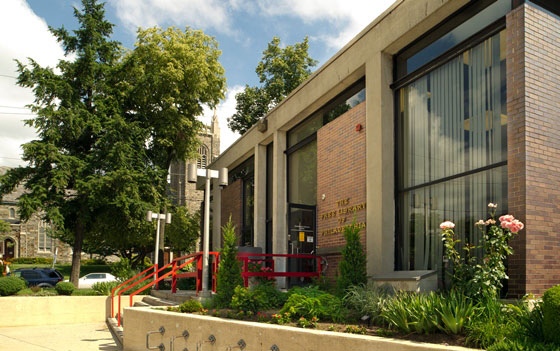 Located on busy Ridge Avenue, the Roxborough Branch serves the communities of Manayunk and Wissahickon as well as Roxborough

In 1690, Andrew Robeson, Sr. built a large house near his mill on the Wissahickon Creek and named it Roxburgh for the area of Scotland where he was from. That same year, he was responsible for making the area a township. The German residents would have spelled it "Rocksburrow."

Manayunk, located on a steep hillside, began to be the site of houses in the 1700's. The name derives from the Lenape Indian name of the river, Maniaung, which means "where we drink."

From colonial days, this region was bisected by a major road: "The Ridge," now known as Ridge Avenue. The road, probably following an old Indian trail, was originally constructed in 1706 to haul lime from Collegeville to Philadelphia.

Hermitage Street was named for a small religious sect made up of "hermits" or Pietists who emigrated from Germany in 1694. They were given 175 acres in the Wissahickon Valley, encompassing the site of the present Hermitage Mansion.

The current Roxborough Branch was preceded by a number of earlier libraries. In the mid-1800s, Jacob B. Smith, a school teacher on the Ridge, instituted a library. After his death, the library was moved to the Roxborough Lyceum, where it prospered. In 1892, the Free Library of Philadelphia opened its fourth branch in this same location at Ridge and Lyceum Avenues.

The Free Library of Philadelphia opened two Carnegie branches in 1909: the Manayunk Branch, at Green Lane and Fleming Streets, and the Wissahickon Branch Library, located at Manayunk Avenue and Kalos Street. The Wissahickon Branch burned to the ground sometime before 1970, and the Manayunk Branch was sold in 1969 when today's Roxborough Branch Library opened.

The William B. Stephens Library on Krams Avenue was established by the family of a wealthy Manayunk mill owner. It closed in 1969 and its foundation was transferred to the Roxborough Library. That foundation continues to purchase most of the materials for Roxborough Library to this day.

From 1961 to 1969, the Free Library's Roxborough Branch was temporarily housed in an old supermarket at 6213 Ridge Avenue. The current Roxborough Library opened in 1969 at 6245 Ridge Avenue. The library was renovated in 1998 as part of the "Changing Lives" campaign, which refurbished branches and brought Internet service.