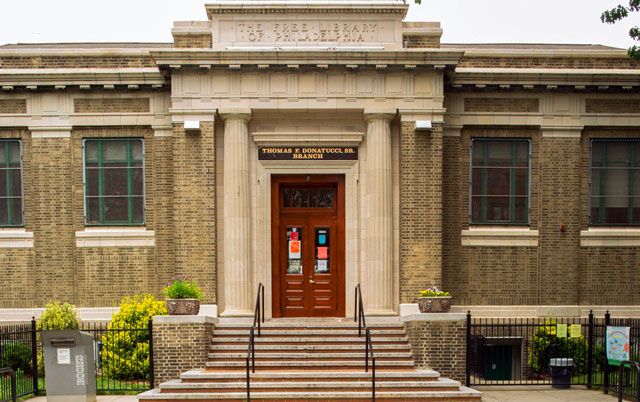 The Donatucci Branch (known as the Passyunk Branch until 2004) has been a vibrant and evolving institution since 1914. Situated at 20th and Shunk Streets, the library serves the neighborhoods of Girard Estate, Packer Park, Passyunk Homes, St. Richards, and West Passyunk.

On April 23, 2004, the Passyunk Branch was renamed the Thomas F. Donatucci, Sr. Branch in honor of the lifetime resident of South Philadelphia whose service to the community began in the 1930s and continued until his death in 1970. Mr. Donatucci held positions as the chairman and leader of the 26th Ward.

The Passyunk Library first opened its doors on April 14, 1914 on a tract of land received from the estate of Stephen Girard (1750-1831). Girard was a French immigrant who was estimated to be the richest man in America at the time of his death. The building was one of 25 libraries built with funds that the great philanthropist, Andrew Carnegie, donated to the Free Library of Philadelphia.

There are several murals in the branch by Calvin Jones. The mural in the meeting room includes Ben Franklin, Stephen Girard, Andrew Carnegie, and young patrons of the library.