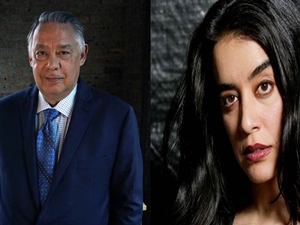 In conversation with Nermeen Shaikh, co-Host and Producer at Democracy Now! Ms. Shaikh is the author of The Present as History: Critical Perspectives on Global Power and has an M.Phil. in politics from Cambridge University.

Juan González frequently co-hosts Democracy Now! with Amy Goodman and is the author of the books Fallout: The Environmental Consequences of the World Trade Center Collapse and Harvest of Empire: A History of Latinos in America. He was a columnist for the New York Daily News from 1987 to 2016. A recipient of the George Polk Award for excellence in journalism and the Hispanic Academy of Media Arts and Sciences Lifetime Achievement Award, González is a former president of the National Association of Hispanic Journalists and an inductee into the New York Journalism Hall of Fame. His latest book argues that Bill De Blasio’s landslide mayoral victory was a mandate for a more populist, less corporate Gotham.