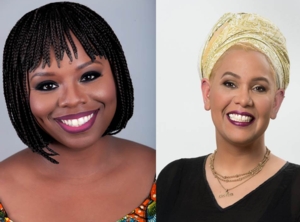 Patrisse Khan-Cullors and asha bandele | When They Call You a Terrorist: A Black Lives Matter Memoir

In conversation with Marc Lamont Hill, Steve Charles Chair in Media, Cities and Solutions at Temple University, and author of  Nobody: Casualties of America's War on the Vulnerable, from Ferguson to Flint and Beyond.

An L.A.-based artist, activist, and advocate for criminal justice reform, Patrisse Khan-Cullors is one of the co-founders of the Black Lives Matter movement. She is also a Fulbright scholar, a 2015 NAACP History Maker, and one of Fortune’s 2016 World’s Greatest Leaders. A former features editor for Essence magazine and a senior director at the Drug Policy Alliance, asha bandele is the author of the memoirs The Prisoner’s Wife and Something Like Beautiful, as well as two poetry collections. When They Call You a Terrorist is an impassioned rebuttal to those who call Black Lives Matter a threat to America, praised by Michael Eric Dyson for portraying its genesis in “love—love of self, community, people, and, ultimately, the very soul of a democratic nation."

Poet Miriam Harris begins the evening with a powerful reading of two of her poems.