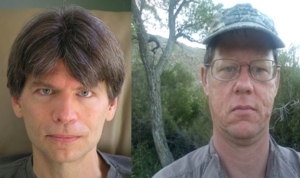 Richard Powers | The Overstory with William T. Vollmann | No Immediate Danger: Volume One of Carbon Ideologies

A “genuine artist … who can render the intricate dazzle of it all and at the same time plumb its philosophical implications” (Esquire), Richard Powers explores a remarkable range of subject matters in his novels. Among them are The Echo Maker, a story of the precarious brain, mass migrations, and car accidents; Orfeo, the narrative of a falsely accused amateur scientist/composer; and Three Farmers on Their Way to a Dance, in which a WWI-era photo sends two men on very different quests. His many honors include the National Book Award, a MacArthur Fellowship, the Lannan Literary Award, and two Pushcart prizes. Powers’ new book evokes activism, resistance, and the beauty of the natural world in the tale of disparate people saved and summoned by trees.

A writer of “wide learning, audacious innovation and sardonic wit” (Washington Post), prolific polymath William T. Vollmann is a novelist, short-story writer, essayist, and war correspondent. His 10 novels include the National Book Award-winning Europe Central, a portrait of Germany and the USSR at war. Two of his works of nonfiction, Rising Up and Rising Down and Imperial, were National Book Critics Circle Award finalists. Vollmann’s articles and fiction have appeared in Harpers, The New Yorker, Esquire, and too many other publications to name. With firsthand research, sardonic wit, and far-reaching scope, No Immediate Danger details the ongoing disaster of the Fukushima nuclear plant and the global consequences of climate change.