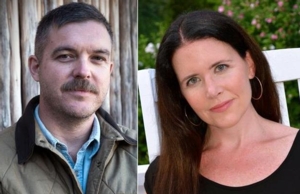 Kevin Powers won the 2013 PEN/Hemingway Award  and the Guardian First Book Award for The Yellow Birds, “the first great Iraq War novel” (Rolling Stone), a work drawn from his experiences as a U.S. Army machine-gunner in Mosul and Tal Afar. After being honorably discharged, he earned an MFA from the University of Texas at Austin, where he was a Michener Fellow in Poetry. In A Shout in the Ruins, Powers reckons with America’s legacy of slavery and violence as he follows the fates of the inhabitants and descendants of a Virginia plantation.

Director of the undergraduate creative writing program at the University of the Arts in Philadelphia, Elise Juska is the author of the novels One for Sorrow, Two for Joy; The Hazards of Sleeping Alone; Getting Over Jack Wagner; and The Blessings, the “bighearted … moving, multifaceted” (Philadelphia Inquirer) story of a close-knit Irish-Catholic Philadelphia family across two decades.  Juska’s latest novel tells the tragically relevant story of an English professor whose former student commits a mass shooting at a mall in rural Maine.