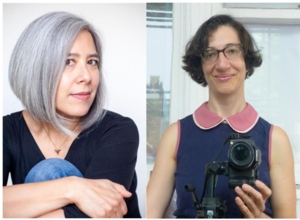 Excavating the hidden corners of the human heart and acclaimed for their “nuance, psychological acuity, and pitch-perfect writing” (Los Angeles Times), Susan Choi’s novels include the Asian American Literary Award-winning The Foreign Student; American Woman, a finalist for the 2004 Pulitzer Prize; A Person of Interest, a finalist for the 2009 PEN/Faulkner Award; and My Education, winner of the Lambda Literary Award for Bisexual Fiction. A creative writing teacher at Yale, Choi has earned Guggenheim and National Endowment for the Arts fellowships. Trust Exercise follows a star-crossed suburban teen romance in a 1980s performing arts high school.

Myla Goldberg is the author of the bestselling Bee Season, the story of a family’s disintegration told through the lens of a young spelling prodigy. It was a New York Times Notable Book, a finalist for the PEN/Hemingway Award and the New York Public Library’s Young Lions Fiction Award, and was adapted into a film starring Richard Gere. Her other novels include The False Friend and Wickett’s Remedy. Goldberg’s new novel is a portrait of an ambitious 1950s-era photographer and mother formed through a collage of perspectives on the character’s art and life.