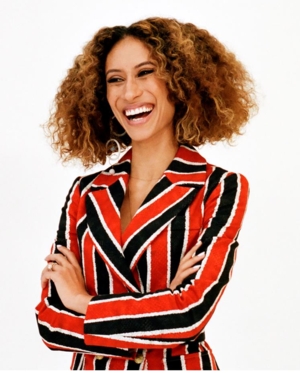 Elaine Welteroth | More Than Enough: Claiming Space for Who You Are (No Matter What They Say)

In conversation with Rakia Reynolds, founder and CEO of Skai Blue Media

The firebrand former editor-in-chief of Teen Vogue and the first African American ever to hold the post of beauty and health director in Condé Nast’s 107-year history, Elaine Welteroth “masterminded the reinvention of the beauty and fashion magazine as a voice for social justice” (Chicago Tribune). Also a former editor at Glamour and Ebony, she is currently a judge on Project Runway, has written for the show Grown-ish, and has appeared as a commentator in numerous media outlets. Welteroth’s New York Times bestselling manifesto/memoir More Than Enough unpacks insights on barrier breaking, identity, and race for those seeking to claim space in the workplace and the world on their own terms.

One of the most sought-after minds in strategic communications, Rakia Reynolds is a thought leader, tastemaker, and branding expert who advises top Fortune 500 companies on creative strategy. Rakia (pronounced RA-KEY-AH) has been guiding client successes with her own distinctive brand of authenticity and expertise for over 15 years. Recently, she served as creative director for Philadelphia’s bid for Amazon H2Q— which has resulted in landing Philly as a top 20 finalist from contending cities across the country. Rakia is the Founder and CEO of strategic communications agency Skai Blue Media. A non-traditional agency, Skai Blue Media is a proudly eclectic group of storytellers, brand experts, and strategists. Her team works with lifestyle, technology, non-profit, entrepreneurs and brands, and is based in Philadelphia and New York.