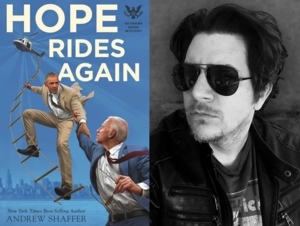 They’re back! In Andrew Shaffer’s sequel to the New York Times bestseller Hope Never Dies, the bromantic thriller that saw the former president and vice president tumble down a Delaware rabbit hole of conspiracy and murder, Obama and Biden are once again drawn into a web of intrigue only they can untangle. This time, when Biden joins his old friend and boss in Chicago, a stolen BlackBerry leads to a deeper cabal that unfolds in speakeasies, high-rises, and the streets of the Windy City’s South Side. Shaffer’s other genre-bending bestsellers include Fifty Shames of Earl Grey, How to Survive a Sharknado and Other Unnatural Disasters, and The Day of the Donald.