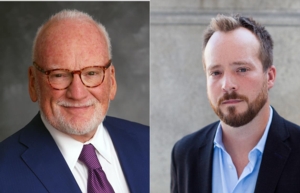 Richard A. Clarke and Robert K. Knake | The Fifth Domain: Defending Our Country, Our Companies, and Ourselves in the Age of Cyber Threats

In conversation with Michael A Smerconish

Veteran counterterrorism czar and one of the world’s leading experts on cyberspace security, Richard A. Clarke worked for seven presidents and devoted three decades of his professional life to combating threats to the United States. He is the author of four novels and four nonfiction books, including the New York Times bestseller Against All Enemies: Inside America’s War on Terror. From 2011 to 2015, Robert K. Knake served in the Obama administration as director for cybersecurity policy at the National Security Council. A senior fellow at the Council on Foreign Relations and senior research scientist at Northeastern University’s Global Resilience Institute, he is also a security advisor for a wide swath of businesses. In The Fifth Domain—the Pentagon’s name for cyberspace—Clarke and Knake detail cyberattacks, web warriors and weapons fighting on the front lines of these incursions, and the ways that governments, businesses, and citizens can confront these threats.