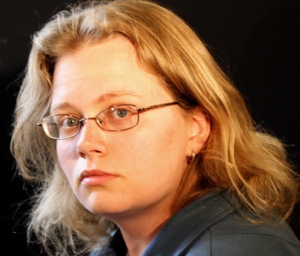 One of contemporary sci-fi/fantasy’s most popular writers, Seanan McGuire won the Hugo, Nebula, and Locus Awards for the Wayward Children series of books. Also the author of, among other books, the October Day series and the InCryptid series, she writes science fiction/horror under the pen name Mira Grant and has published several works of nonfiction. She is currently writing the Spider-Gwen: Ghost-Spider comic series for Marvel. Her other honors include the 2011 Shirley Jackson Award and the 2010 John W. Campbell Award for Best New Writer. In Middlegame, McGuire introduces a polyglot, his numbers-obsessed twin, and an alchemist who pushes them toward godhood. Imaginary Numbers is the ninth book in the sprawling InCryptid urban fantasy series.

*Production note: the interlocutor's audio is a bit muddled throughout but Seanan's audio sounds fine.