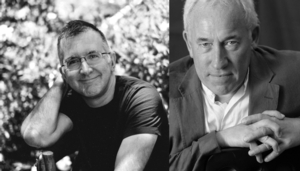 Alex Ross | Wagnerism: Art and Politics in the Shadow of Music

In conversation with Simon Callow

Music critic for the New Yorker since 1996, Alex Ross is the author of the international bestseller The Rest Is Noise: Listening to the Twentieth Century. A trip down the rabbit hole of modern sound’s biggest moments and personalities, it won the 2007 National Book Critics Circle Award and was a Pulitzer Prize finalist. Ross is also the author of Listen to This, an essay collection ranging in topic from Mozart to Led Zeppelin. A 2008 MacArthur Fellow and a 2015 Guggenheim Fellow, he is the recipient of the ASCAP Deems Taylor Award and a Letter of Distinction from the American Music Center for his contributions to contemporary music. His latest book examines Richard Wagner’s soaring music, vile politics, and complicated legacy.

Acclaimed British actor Simon Callow is best known for his roles in films such as Amadeus and Four Weddings and a Funeral, though he has appeared in scores of other movies, television shows, and stage plays. He has also directed a wide variety of stage productions of operas, musicals, and dramas for such institutions as the Old Vic, the Royal Shakespeare Company, and the Scottish Opera. An accomplished author, Callow has written at length about Charles Dickens, whom he has played on both stage and screen. He has also penned an acclaimed book on acting, biographies of Orson Welles, Oscar Wilde and Richard Wagner, and articles about classical music for Gramophone magazine.