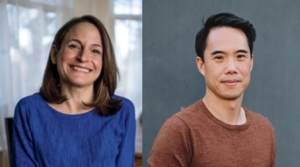 Karen Russell’s debut novel, Swamplandia!, the tale of a family’s run-down alligator-themed Everglades amusement park, was a New York Times Best Book of the Year, a Pulitzer Prize finalist, and a nominee for the Orange Prize. Her short story collections include Vampires in the Lemon Grove, Orange World and Other Stories, and St. Lucy’s Home for Girls Raised by Wolves. She is the Endowed Chair in Creative Writing at Texas State University’s MFA program, and her many honors include fellowships from the MacArthur and Guggenheim Foundations and the Shirley Jackson Award for Best Novelette. A dystopian novella “with a Swiftian sense of satire” (Boston Globe), Sleep Donation tells the story of a corporate recruiter’s battle against a lethal insomnia epidemic.

“A superhero of rendering human consciousness and emotion” (New York Times Book Review), Charles Yu is the author of How to Live Safely in a Science Fictional Universe, a romp through quantum space-time that was one of Time magazine’s best books of the year. A recipient of the National Book Foundation’s 5 Under 35 Award, he has twice been nominated for Writers Guild of America Awards for his work on HBO’s Westworld. A send-up and take-down of Tinseltown tropes and racial stereotypes, Interior Chinatown follows a protagonist who fights to see himself as the hero in his own life story. Yu won the National Book Award in Fiction for 2020.