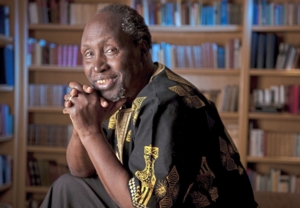 Ngũgĩ wa Thiong’o | The Perfect Nine: The Epic of Gĩkũyũ and Mũmbi

In conversation with Ketu H. Katrak, Professor in the Department of Drama at the University of California, Irvine, and author of the forthcoming book Jay Pather, Performance, and Spatial Politics in South Africa

Acclaimed Kenyan scholar and writer Ngũgĩ wa Thiong’o is the author of the novels A Grain of Wheat; Weep Not, Child; and Petals of Blood, among several other works of fiction, memoirs, children’s books, and essays. The Distinguished Professor of English and Comparative Literature and the director of the International Center for Writing and Translation at the University of California, Irvine, he has been awarded 12 honorary doctorates, was nominated for the Man Booker Prize, and is annually tipped to win the Nobel Prize in Literature. In The Perfect Nine, Thiong’o spins a “sinuous retelling” of the origin of the Gĩkũyũ people of Kenya “as an epic poem rivaling the Iliad in body count and surpassing it in whimsy” (New Yorker).