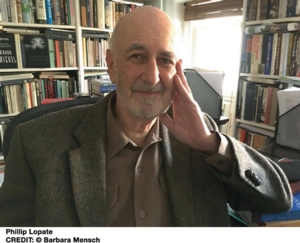 In conversation with Carrie Rickey, writer and former film critic for The Philadelphia Inquirer

Phillip Lopate’s “observant, elegiac, and far-reaching” (New York Times) essay collections include Bachelorhood, Against Joie de Vivre, and Portrait Inside My Head. His other acclaimed work includes a diverse array of travel writing, film and architectural criticism, poetry, fiction, and memoir which has appeared in periodicals such as Paris Review and Esquire. A professor of nonfiction writing at Columbia University’s MFA program, Lopate is the recipient of a Guggenheim Fellowship, two National Endowment for the Arts Ggrants, and is a Fellow of the American Academy of Arts and Sciences. In The Golden Age of the American Essay, Lopate anthologizes some of the most brilliant writing produced in the inspiring but tumultuous decades following World War II.