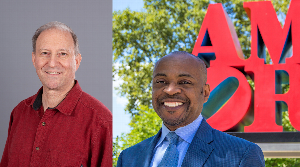 In conversation with Reggie Shuford, Executive Director of the American Civil Liberties Union (ACLU) of Pennsylvania.

The Executive Director of the Atlantic Center for Capital Representation, Marc Bookman is an internationally renowned expert on death penalty law. He served for 17 years in the Homicide Unit of the Defender Association of Philadelphia, providing legal representation to many clients facing the possibility of the death penalty. A sought-after speaker at numerous legal conferences and trainings across the country, he has published essays on various aspects of capital punishment in The Atlantic, Mother Jones, and VICE, among other places. In A Descending Spiral, Bookman offers 12 essays that expose the tragic absurdities, unfortunate human instincts, and systemic criminal justice failings that undercut the logic and fairness of the death penalty in the United States.