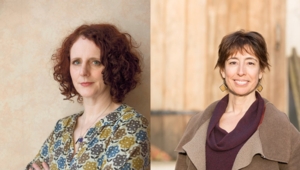 Maggie O’Farrell  | Hamnet: A Novel of the Plague

In conversation with Nicole Galland, historical novelist and author of Master of the Revels and creator of Shakespeare for the Masses

With a “gift for combining intricate, engrossing plots with full-bodied characterizations” (Washington Post), Irish–British novelist Maggie O’Farrell is the author of After You’d Gone, The Distance Between Us, The Hand That First Held Mine, and Instructions for a Heatwave, among several others. A former journalist in Hong Kong, deputy literary editor of the Independent on Sunday, and creative writing teacher, she is also a bestselling author. O’Farrell’s work has won the Somerset Maugham Award, the Betty Trask Award, the Costa Award, and has been translated into more than 30 languages. Hamnet, winner of the 2020 Women’s Prize for Fiction, tells the Elizabethan-era tale of William Shakespeare’s family including his force–of–nature wife, Shakespeare’s journey as a rising star, and the shared grief over the loss of their son Hamnet whose name Shakespeare would later use in his play Hamlet.