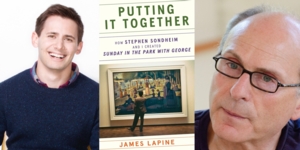 James Lapine | Putting It Together: How Stephen Sondheim and I Created “Sunday in the Park with George”

A celebrated director, playwright, screenwriter, and librettist, James Lapine earned three Tony Awards for “Best Book of a Musical” for Passion, Falsettos, and Into the Woods. His many other honors include the Pulitzer Prize in Drama, five Drama Desk Awards, a Peabody Award, and induction into the Theater Hall of Fame. He also directed the feature films Impromptu, Life with Mikey, and Earthly Possessions. Putting It Together is about Lapine’s collaboration with Stephen Sondheim to create Sunday in the Park with George, their iconic 1984 Broadway musical based on Georges Seurat’s painting, A Sunday Afternoon on the Island of La Grande Jatte.

Benj Pasek is an Oscar, Grammy, Tony, and Golden Globe Award-winning songwriter and New York Times bestselling author. Along with frequent collaborator Justin Paul, he is best known for his work on Dear Evan Hansen, La La Land, and The Greatest Showman. The accompanying albums for each project have appeared in the top 10 of the Billboard 200, the latter of which is certified Platinum in over a dozen countries. He is on the board of the Dramatist Guild Foundation and the American LGBTQ+ Museum.