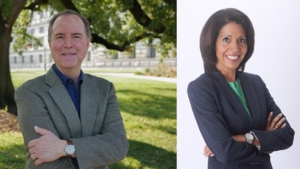 Adam Schiff | Midnight in Washington: How We Almost Lost Our Democracy and Still Could