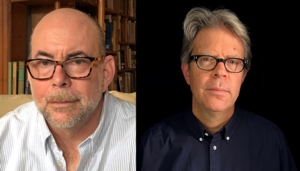 Donald Antrim | One Friday in April: A Story of Suicide and Survival

In conversation with Jonathan Franzen, bestselling author of Crossroads, Freedom, Purity, and The Corrections among other works of fiction and non-fiction.

“A fiercely intelligent writer” (The New York Times), Donald Antrim is the author of three critically acclaimed novels, Elect Mr. Robinson for a Better World, The Hundred Brothers, and The Verificationist. His other work includes Afterlife, a memoir about his mother; The Emerald Light in the Air, a story collection compiled from his published work’s frequent appearances in The New Yorker; and essays and articles  published in a variety of periodicals. He has received grants and awards from the Guggenheim Foundation, the National Endowment for the Arts, and the MacArthur Foundation, among others. In One Friday in April, Antrim uses the harrowing circumstances surrounding his 2006 suicidal thoughts and actions to reframe this misunderstood illness as something other than the choice of a depressed person.