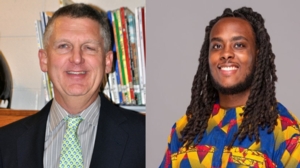 Woody Holton | Liberty Is Sweet: The Hidden History of the American Revolution

In conversation with Adam McNeil, host of the New Books in African American Studies podcast

The McCausland Professor of History at the University of South Carolina, Woody Holton teaches early U.S. history, specializing in economics, African American history, Indigenous history, and women’s history. His many books include the Bancroft Prize–winning biography Abigail Adams; Forced Founders, winner of the Merle Curti Award from the Organization of American Historians; and Unruly Americans and the Origins of the Constitution, a National Book Award finalist. He is also the recipient of fellowships from the National Endowment for the Humanities and the Guggenheim Foundation. In Liberty Is Sweet, Holton uses more than a thousand primary accounts to offer a wide-ranging reassessment of marginalized peoples’ contributions to U.S. independence and their conflicts with the values, decisions, and agendas of the Founding Fathers.

Adam McNeil is a Ph.D. Candidate in the Department of History at Rutgers University, where he writes about Black Women from the Chesapeake Bay during the Revolutionary and Founding eras. Adam’s research has been supported by fellowships from the University of Michigan’s Clements Library, the David Center for the American Revolution at the American Philosophical Society, and the Omohundro Institute of Early American History & Culture. In addition to academic writing, Adam regularly contributes to academic blogs Black Perspectives and The Junto, and regularly interviews scholars on the New Books in African American Studies podcast, where he has interviewed nearly one hundred scholars about their works in African American Studies and African American History.