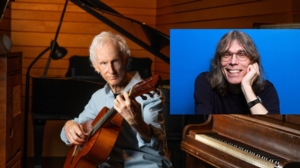 Robby Krieger: | Set the Night on Fire: Living, Dying, and Playing Guitar With the Doors

In conversation with David Fricke, senior editor for Rolling Stone and SiriusXM host

One of Rolling Stone’s “100 Greatest Guitarists of All Time”, Robby Krieger is best known as a member of the legendary rock band The Doors. He wrote or co-wrote some of the group’s biggest commercial hits, including “Light My Fire,” “Touch Me,” “Love Me Two Times,” and “Love Her Madly.” While The Doors have sold over one hundred million albums worldwide, inspired Oliver Stone’s popular biopic feature film, and have received a Lifetime Achievement Grammy, Krieger has also become a Grammy-nominated solo artist, an accomplished painter, and he is the co-founder of the annual Medlock-Krieger Rock & Roll Golf Classic & All-Star Concert. In Set the Night on Fire, Krieger, the notoriously reserved musician describes his childhood, The Doors’ triumphs and tragedies, and the frank details of his personal struggles.