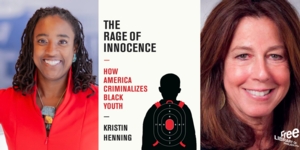 In conversation with Marsha Levick, cofounder, deputy director, and chief counsel of the Juvenile Law Center

The Blume Professor of Law and director of the Juvenile Justice Clinic and Initiative at the Georgetown University Law Center, Kristin Henning represents young people in Washington, D.C.’s Superior Court and conducts nationwide training of criminal justice institutions across the U.S. on the intersection of race, adolescence, and policing. She is the former lead attorney of the Juvenile Unit at the Public Defender Service for the District of Columbia and serves on the board of directors for the Center for Children’s Law and Policy. In The Rage of Innocence, Henning exposes the day-to-day but widely hidden ways in which discriminatory and aggressive policing traumatizes Black children and leads them to fear, resist, and resent the police.

Marsha Levick is the cofounder, deputy director, and chief counsel of the Juvenile Law Center, the oldest public interest law firm for children in the United States. For more than 35 years, Ms. Levick has been an advocate for children’s and women’s rights, earning recognition as a national leader in juvenile law. Ms. Levick has authored or co-authored numerous briefs before the U.S. Supreme Court and many federal and state courts, contributing to cases including Roper v. Simmons, striking the juvenile death penalty; Graham v. Florida, striking juvenile life without parole sentences for non-homicide crimes; JDB v. North Carolina, requiring consideration of youth status in the Miranda custody determination; and Miller v. Alabama, striking mandatory juvenile life without parole sentences in homicide cases.