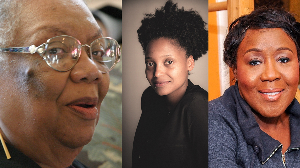 In conversation with Trapeta B. Mayson

Chronicling African American family life and women through 14 celebrated poetry collections, Lucille Clifton won the National Book Award and the Ruth Lilly Poetry Prize, and is the only author ever to have two books of poetry nominated in the same year for the Pulitzer Prize. She also authored scores of children’s books, served as the Poet Laureate of Maryland, and earned fellowships from the National Endowment for the Arts and the Academy of American Poets. Originally published 34 years before her 2010 death, Generations is a memoir that traces Clifton’s family’s history from Buffalo, New York back to the Jim Crow South and the slave trade, all the way to the women of the Dahomey people of West Africa.

Generations is prefaced by an all-new forward from Tracey K. Smith. A former two-term United States Poet Laureate, she is currently the chair of Princeton University's Lewis Center for the Arts and a Chancellor of the Academy of American Poets. She is the author of four books of verse, including the Pulitzer Prize–winning Life on Mars, as well as the memoir Ordinary Light.

In conversation with Trapeta B. Mayson, Philadelphia Poet Laureate and the author of She Was Once Herself and Mocha Melodies.