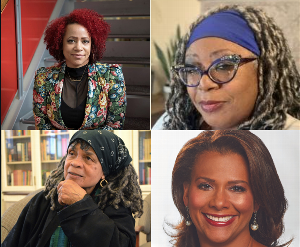 Nikole Hannah-Jones won the 2020 Pulitzer Prize for Commentary for her work on The 1619 Project, a continuing initiative started byThe New York Times Magazine to reexamine United States history through the consequences of slavery and the contributions of Black Americans. The co-founder of the Ida B. Wells Society for Investigative Reporting, Hannah-Jones has earned, among many other honors, a Peabody Award, two George Polk Awards, three National Magazine Awards, and a MacArthur Foundation Fellowship. She was recently was named the Knight Chair in Race and Journalism at Howard University. Interweaving 18 essays with 36 works of fiction and nonfiction by a group of writers of diverse backgrounds, skills, and experiences, The 1619 Project: A New Origin Story is a greatly expanded exploration of the continuing legacy of slavery in our cultural, political, and legal institutions.