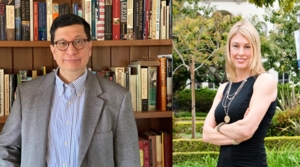 Jorge L. Contreras | The Genome Defense: Inside the Epic Legal Battle to Determine Who Owns Your DNA

In conversation with Orly Lobel, author of You Don't Own Me: The Court Battles that Exposed Barbie's Dark Side

Specializing in intellectual property and science policy, Jorge L. Contreras is a professor of law and ethics of human genetics at the University of Utah. His more than 100 scholarly articles have appeared in publications such as Science, Harvard Journal of Law and Technology, and Nature, and he has been featured on BBC Radio, NPR, and PRI, among other media outlets. A member of the Advisory Board of the American Antitrust Institute, Contreras has served on several other high-level governmental, research, and legal boards. The Genome Defense follows the intense high-stakes courtroom fight undertaken by ACLU lawyers, activists, and scientists against biotech companies seeking to patent the very material that makes us who we are.

Orly Lobel is the award-winning author of several books and numerous articles. She is the Warren Distinguished Professor of Law at the University of San Diego and received her doctoral and law degrees from Harvard University. She is a prolific speaker, commentator, and scholar who travels the world lecturing about policy and industry.