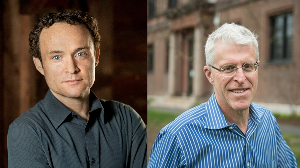 Kevin Birmingham | The Sinner and the Saint: Dostoevsky and the Gentleman Murderer Who Inspired a Masterpiece