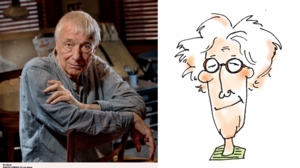 In conversation with Signe Wilkinson

“One of America’s foremost political satirists” (The New York Times), illustrator, caricaturist, and cartoonist Edward Sorel has illustrated 41 covers for The New Yorker and has published pictorial essays and features in The Nation, Vanity Fair, Esquire, and The Atlantic, among many other publications. His many pictorial books include Literary Lives, Unauthorized Portraits, and Mary Astor’s Purple Diary. The recipient of the George Polk Award for Satiric Drawing and the Best in Illustration Award from the National Cartoonists Society, Sorel’s work has been exhibited in numerous galleries and museums. His new memoir combines 172 of his drawings, cartoons, and caricatures with lively prose to tell the story of his Depression-era Bronx upbringing, the adventures in his rich personal life, and extraordinary 70-year career.

Signe Wilkinson is a widely syndicated cartoonist and the first woman to win the Pulitzer Prize for Editorial Cartooning. Formerly based at The Philadelphia Inquirer, she is the recipient of three Overseas Press Club Awards. With Jonathan Zimmerman she co-authored the book Free Speech: And Why You Should Give a Damn.