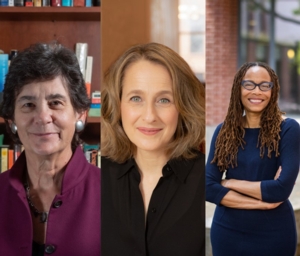 Kathryn Kolbert and Julie F. Kay | Controlling Women: What We Must Do Now to Save Reproductive Freedom

In conversation with Dorothy Roberts

Recognized by the National Law Journal as one of the “100 Most Influential Lawyers in America,” Kathryn Kolbert made history in 1992 when she argued the case Planned Parenthood v. Casey before the U.S. Supreme Court, a case widely recognized as protecting the right to an abortion guaranteed by Roe v. Wade. The founder of the Athena Center for Leadership at Barnard College and the cofounder of the Center for Reproductive Rights, she created and was the executive producer of NPR’s Justice Talking series.

Julie F. Kay has spent decades on the front lines of the legal fight to advance gender equality and religious freedom in the U.S. and internationally. After starting her career in law as a staff attorney at the Center for Reproductive Rights , she has since helped pave the way for the legalization of abortion in Ireland, fought to protect the parenting rights of people leaving ultra-religious communities, and served as a founding president of Women’s Link Worldwide.

In Controlling Women, Kolbert and Kay offer a comprehensive account of the struggle to safeguard the protections of Roe v. Wade and preserve women’s fundamental reproductive rights in the face of nearly 50 years of legal battles.

Dorothy Roberts is a professor at the University of Pennsylvania Carey Law School. She is also founding director of the Penn Program on Race, Science & Society in the Center for Africana Studies and the author of several books that focus on health, social justice, and bioethics.