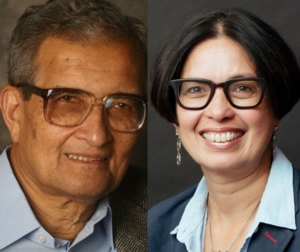 Amartya Sen | Home in the World: A Memoir

In conversation with Priya Joshi, Professor of English at Temple University in Philadelphia

Economist Amartya Sen received the Nobel Prize for his “fascinating ... eloquent, and probing” (The New York Times) work on social choice theory, welfare economics, development economics, and economics during peacetime and war. Advocating for ethical economies that prioritize tolerance, pluralism, and harmony, his many books include An Uncertain Glory: India and its Contradictions, Development as Freedom, and Identity and Violence: The Illusion of Destiny. The Lamont University Professor at Harvard University, Sen is the recipient of many honors, including the Bharat Ratna, which is the most distinguished honor awarded by the president of India, the Eisenhower Medal, the French Legion of Honor, and the National Humanities Medal. “A portrait of a citizen of the world” (The Spectator), Home in the World recounts how his experiences in Asia, Europe, and the United States continue to shape his moral vision for the future.

Priya Joshi is a scholar of narrative who studies the social work of popular culture from the nineteenth- to twenty-first centuries. Priya’s books include In Another Country:  Colonialism, Culture, and the English Novel in India which won the Modern Language Association’s First Book Prize, and Bollywood’s India:  A Public Fantasy, both published by Columbia University Press.   She’s currently completing a study called Good Bad Books about the titles that everybody loved to read but hated to admit that they did.