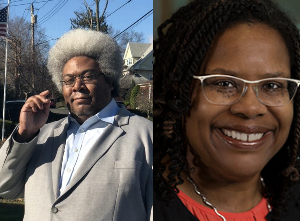 Elie Mystal | Allow Me to Retort: A Black Guy’s Guide to the Constitution

In conversation with Danielle M. Conway

The Nation’s legal analyst and justice correspondent, Elie Mystal is an Alfred Knobler fellow at the Type Media Center and is the legal editor of More Perfect, Radiolab’s podcast about the U.S. Supreme Court. A Harvard Law School graduate and former litigator at Debevoise & Plimpton, he was the executive editor of Above the Law, a news site sharing details and original commentary about the legal profession. Mystal is a frequent guest on MSNBC and Sirius XM. Referred to by Don Winslow as “a powerful and important book of brightly alive ideas,” Allow Me to Retort is a guidebook for how the U.S. Constitution should accurately be interpreted in opposition to Republican claims.

Dean and Donald J. Farage Professor of Law at Penn State Dickinson Law, Danielle M. Conway is an expert in procurement law, entrepreneurship, intellectual property law, and licensing intellectual property. She formerly was the dean of the University of Maine Law and served on the faculties at several other law schools. The author of numerous books, articles, and essays, Conway is the co-recipient of the Association of American Law Schools’ Impact Award, and in 2016 she retired from the U.S. Army as a lieutenant colonel after 27 years of service.