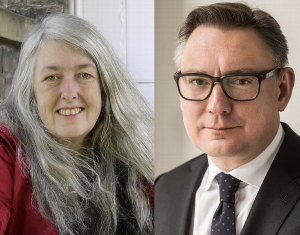 Mary Beard | Twelve Caesars: Images of Power from the Ancient World to the Modern

In conversation with Michael Kulikowski

“A national treasure, and easily the world’s most famous classicist” (The Guardian), Mary Beard “radiates authority and expertise” in guiding her readers through the world of Ancient Roman civilization. She is a professor at the University of Cambridge, a fellow of Newnham College, and a Royal Academy of the Arts professor of ancient literature. Some of her seminal works include Rome in the Late Republic, The Parthenon, The Fires of Vesuvius, and S.P.Q.R.: A History of Ancient Rome. Beard is also the classics editor of the Times Literary Supplement, where her column “A Don’s Life” is regularly published. A frequent contributor to The New York Review of Books, she has written and presented several BBC historical documentaries. Twelve Caesars explores the ways in which images of Roman emperors have influenced artists and thinkers for more than 2,000 years.

The head of the history department and the Edwin Erle Sparks Professor of History and Classics at Pennsylvania State University, Michael Kulikowski is the author of Rome’s Gothic Wars, Late Roman Spain and Its Cities, The Triumph of Empire, and The Tragedy of Empire. He has appeared in several History Channel documentaries, has published numerous academic articles, and is a regular contributor to the London Review of Books and The Wall Street Journal.