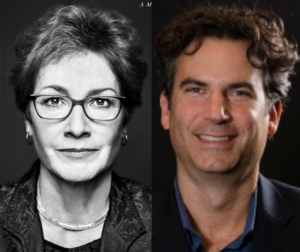 Marie Yovanovitch | Lessons From the Edge: A Memoir

In conversation with Mitchell Orenstein, Department Chair and Professor of Russian and East European Studies, University of Pennsylvania

In 2019, U.S. Ambassador to Ukraine Marie Yovanovitch was the focus of international interest when then-President Donald Trump and his allies targeted Yovanovitch amidst their efforts to pressure Ukrainian officials to investigate Joe Biden’s family. This scandal led to the first impeachment proceedings against Trump, a major aspect of which was Yovanovitch’s impassioned and steadfast congressional testimony. The child of parents who fled Nazi and Soviet atrocities, she has served in numerous senior State Department positions, including U.S. ambassador to Armenia, U.S. ambassador to Kyrgyzstan, under secretary of state for political affairs, and principal deputy assistant secretary for the Bureau of European and Eurasian Affairs. Yovanovitch retired from the U.S. Foreign Service in 2020 and is currently a diplomat in residence at Georgetown University’s Institute for the Study of Diplomacy. Lessons from the Edge uses experiences from her life and career to offer lessons about the ways in which corruption can endanger democracy.