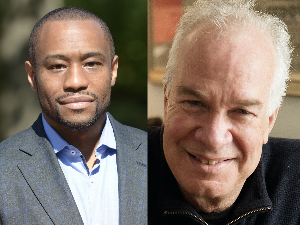 The host of BET News, Black News Tonight, and UpFront, Marc Lamont Hill is the Steve Charles Chair in Media, Cities, and Solutions at Temple University. His books include Nobody: Casualties of America's War on the Vulnerable, from Ferguson to Flint and Beyond and Except for Palestine: The Limits of Progressive Politics. Hill is the owner of Philadelphia’s Uncle Bobbie’s Coffee & Books and is the founder and director of the People’s Education Center, a Germantown-based nonprofit organization devoted to community education.

Todd Brewster is the co-author, with Peter Jennings, of the #1 New York Times bestseller The Century. His other work includes the books Lincoln’s Gamble and In Search of America, and articles published in Vanity Fair, Time, and Life, where he served as a senior editor. Currently the senior visiting lecturer in journalism at Mount Holyoke College, he taught journalism at Temple University, was a Knight fellow at Yale Law School, and was the founding director of the Center for Oral History at West Point. Brewster is also the executive producer of the awardwinning documentary Into Harm’s Way.

In Seen and Unseen, Hill and Brewster analyze the role of visual media in the ongoing struggle for racial justice while examining what makes this moment unique in the overall history of civil rights movements in the United States.