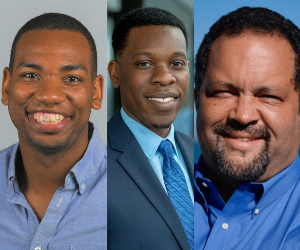 Robert Samuels and Toluse Olorunnipa | His Name Is George Floyd: One Man’s Life and the Struggle for Racial Justice

In conversation with Benjamin Todd Jealous

A political enterprise and investigations reporter for The Washington Post since 2011, Robert Samuels has chronicled the impact of national policies and controversies from across the United States. He formerly worked at the Miami Herald, where he reported on politics, poverty, and crime. His work has earned the 2020 George Polk Award in Justice Reporting and a 2020 Peabody Award, among other honors.

Toluse Olorunnipa has been a political enterprise and investigations reporter for The Washington Post since 2019. He previously reported on the White House, the first correspondent of native African and Nigerian descent to do so. A former political and policy reporter at Bloomberg News and crime, real estate, and natural disasters reporter at the Miami Herald, he is also currently an on-air contributor for CNN.

In His Name Is George Floyd, Samuels and Olorunnipa reveal how systemic racism led to tragic murder of George Floyd in Minneapolis and inspired worldwide protests and policy changes. Referred to by Henry Louis Gates Jr. as “an essential work of history,” it uses hundreds of interviews and original research to tell George Floyd’s story as a father, partner, friend, and man constantly in search of a better life.

The current president of the People for the American Way, Benjamin Todd Jealous teaches social innovation at The University of Pennsylvania's School of Social Policy and Practice. He is the former national president and CEO of the NAACP, the former executive director of the National Newspaper Publisher’s Association, and was a visiting professor at Princeton University’s Woodrow Wilson School. The coeditor of the national bestseller Reach: 40 Black Men Speak of Living, Leading and Succeeding, he is an investor in social impact startups and advises Citizen, an app that provides real-time 911 alerts.