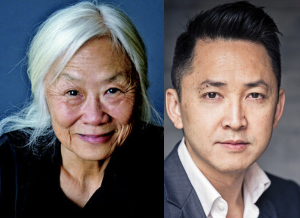 Acclaimed for her contributions to feminism and Chinese American literature, Maxine Hong Kingston won the 1976 National Book Critics Circle General Nonfiction Award for her first book, The Woman Warrior, and the 1981 National Book Award for general nonfiction for China Men. Her many other books of nonfiction, fiction, poetry, and essays include Tripmaster Monkey, The Fifth Book of Peace, and I Love a Broad Margin to My Life. A professor emerita at the University of California, Berkeley, Kingston is a recipient of the American Academy of Arts and Letters Award in Literature, the National Humanities Medal, and a lifetime achievement award from the Asian American Literary Awards. Her latest work collects three of her classic books, a collection of essays about her time living in Hawaiʻi, and difficult-to-find writings in which she examines her creative process.

Viet Thanh Nguyen won the 2016 Pulitzer Prize in fiction, the Dayton Literary Prize, and the Edgar Award for best first novel for The Sympathizer. His other work includes the novel The Committed, the story collection The Refugees, two books of nonfiction, and a children’s book. The Aerol Arnold Chair of English and professor of English and American Studies and Ethnicity at the University of Southern California, he has earned fellowships from the Guggenheim and MacArthur Foundations.