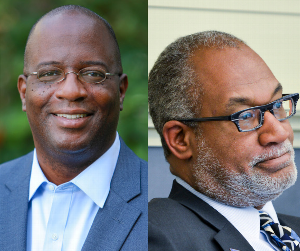 In conversation with Herman Beavers

Gene Andrew Jarrett is the author of Representing the Race: A New Political History of African American Literature and Deans and Truants: Race and Realism in African American Literature. He is the editor of an additional eight books of African American literary studies, including two about 19th century U.S. poet Paul Laurence Dunbar. Dean of the faculty and William S. Tod Professor of English at Princeton University, last year he was appointed to the Association of American Universities’ Advisory Board for Racial Equity in Higher Education. On the 150th anniversary of Dunbar’s birth, Jarrett’s latest book is a nuanced biography of Dunbar as the Gilded Age celebrity, acclaimed as the “poet laureate of his race,” whose improbable success hid profound private struggles.

A professor of English and Africana studies at the University of Pennsylvania, Herman Beavers teaches 20th Century and Contemporary African American literature and poetry writing. He is the author of the scholarly monograph Geography and the Political Imaginary in the Novels of Toni Morrison, the poetry chapbook Obsidian Blues, and his poems have appeared in Cleaver Magazine, Versadelphia, and The American Arts Quarterly, among other publications.