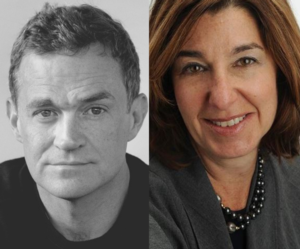 In conversation with Karen Heller, national features writer for The Washington Post, formerly a metro and features columnist for the Philadelphia Inquirer, and a finalist for the 2001 Pulitzer Prize in commentary.

“A master of narrative nonfiction” (Rolling Stone), Patrick Radden Keefe is the author of the New York Times bestseller Empire of Pain: The Secret History of the Sackler Dynasty. A critical history of the family responsible for making and marketing painkillers that led to the opioid crisis, it won the 2021 Baillie Gifford Prize and was a National Book Critics Circle nominee. Keefe is also an award-winning staff writer at The New Yorker and the author of three other books, including the National Book Critics Circle Award winner Say Nothing: A True Story of Murder and Memory in Northern Ireland. His other honors include a Guggenheim Fellowship and the National Magazine Award for feature writing. He wrote and hosted the podcast Wind of Change, selected as the No. 1 podcast of 2020 by The Guardian. Writing about disreputable figures such as wine counterfeiters, arms dealers selling weapons illegally, and Swiss money launderers, Rogues is a collection of 12 of Keefe’s New Yorker articles about corruption, fraud, and power.