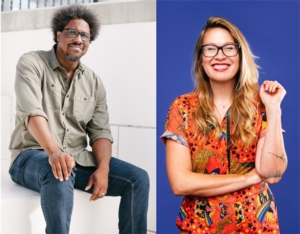 W. Kamau Bell with Kate Schatz | Do the Work!: An Antiracist Activity Book

In conversation with Marc Lamont Hill

W. Kamau Bell is the host and executive producer of the Emmy Award–winning CNN docuseries United Shades of America with W. Kamau Bell, and also directed and executive produced the recent four-part Showtime documentary We Need To Talk About Cosby. He has appeared as a guest and comedian on many television shows, has two comedy specials, hosts the radio show Kamau Right Now, co-hosts two podcasts, and hosted the FXX series Totally Biased with W. Kamau Bell. The author of the memoir The Awkward Thoughts of W. Kamau Bell, he has contributed writing to The New York Times, Vanity Fair, The Hollywood Reporter, and The LA Review of Books, among other places.

Kate Schatz is the author of The New York Times bestselling Rad Women book series. Her other books include the work of fiction Rid of Me, articles and essays in an array of publications, and “Folsom, Survivor,” which was anthologized in The Best American Short Stories 2011. A political organizer and frequent public speaker, she is the co-founder of Solidarity Sundays, a nationwide network of more than 200 feminist activist groups. Schatz is the former chair of the School of Literary Arts at the Oakland School for the Arts, and she taught women’s studies, literature, and creative writing at University of California, Santa Cruz; San Jose State; Rhode Island College; and Brown University.

Filled with activities, ideas, games, illustrations, resources, comics, and prompts for conversations, Do the Work! challenges readers and the people in their lives to better understand systemic racism in order to dismantle it.