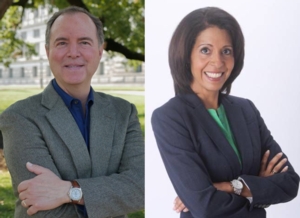 Adam Schiff | Midnight in Washington: How We Almost Lost Our Democracy and Still Could

In conversation with Tracey Matisak, award winning journalist and broadcaster

The United States Representative for California’s 28th Congressional District and the Chairman of the House Permanent Select Committee on Intelligence, Adam Schiff was the lead manager for the first impeachment proceedings against former President Donald Trump. He is a former member of the House Appropriations Committee and the Foreign Affairs Committee, and served as an Assistant U.S. Attorney in Los Angeles from 1987 to 1993 and a California State Senator from 1996 to 2000. In Midnight in Washington, Schiff reveals an inside look at American democracy’s darkest moment, his own path to becoming one of the former president’s most prominent antagonists, and the principles we need to renew and reinvigorate in the struggle against autocracy.