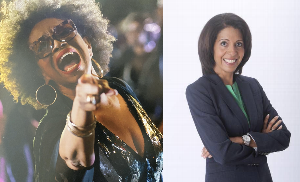 Jenifer Lewis | Walking in My Joy: In these Streets

In conversation with Tracey Matisak, award-winning journalist and interviewer

Co-star of the ABC mega-hit show Black-ish, Jenifer Lewis’ nearly 35-year career has featured roles in some of Hollywood’s most beloved films and television shows. These include such diverse projects as What’s Love Got to Do With It, Pixar’s Cars series, and The Fresh Prince of Bel-Air, among dozens of others. Titled after her unofficial nickname, her memoir The Mother of Black Hollywood charts her journey from a childhood of poverty in the Midwest to the acting roles that have made her an icon. Lewis earned two Critics’ Choice Television Award nominations for her work on Black-ish and her previous work has garnered an NAACP Image Award. Walking in My Joy is an essay collection that celebrates the importance of perseverance in the face of adversity and our need for self-love.