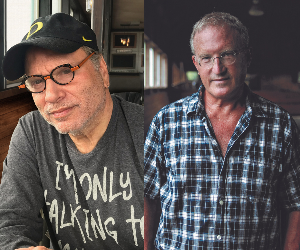 Buzz Bissinger | The Mosquito Bowl: A Game of Life and Death in World War II

In conversation with Mark Bowden

A Pulitzer Prize–-winning journalist and author of four books, Buzz Bissinger is perhaps best known for the New York Times bestseller Friday Night Lights, the 1990 nonfiction chronicle of a Texas high school football team that has since been adapted into a successful film and a long-running television series. His other popular books include 3 Nights in August, A Prayer for the City, and Father’s Day, a memoir about his cross-country journey with his extraordinary son. A contributing editor for Vanity Fair and a sports columnist for The Daily Beast, Bissinger is a longtime contributor to The New York Times, Wall Street Journal, and The Philadelphia Inquirer, among other periodicals. The Mosquito Bowl tells the story of two United States Marine regiments that play a bloody game of football on the eve of the WWII invasion of Okinawa, a battle from which many of the players would not return.

Renowned for his “signature blend of deep reportage and character-driven storytelling (The New York Times Book Review),” Mark Bowden is the author of 15 bestselling books of investigative journalism, including Blackhawk Down, adapted by Ridley Scott into a popular film; Killing Pablo, winner of the Overseas Press Club’s Cornelius Ryan Award for book of the year; The Three Battles of Wanat, a collection of his best long-form essays; and Hue 1968, the story of the Vietnam War’s bloodiest battle as told by participants from both sides.