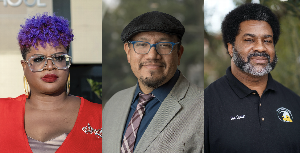 Camika Royal | Not Paved For Us: Black Educators and Public School Reform in Philadelphia

In conversation with Edwin Mayorga and Sharif El-Mekki

For 20 years Camika Royal was a middle and high school teacher and a teaching coach for her fellow educators in Baltimore, Washington, DC, and her hometown of Philadelphia. Currently an associate professor of urban education at Loyola University Maryland, she examines the racial, historical, and sociopolitical contexts of school reform ideologies, policies, and practices. A sought-after speaker and education consultant, she taught at Lincoln University of Pennsylvania and other colleges and universities in the Philadelphia and Baltimore areas.

Associate Professor in Swarthmore College’s Department of Educational Studies and the Program in Latin American and Latino Studies, Edwin Mayorga is the founder of the Education in Our Barrios Project (BarrioEdProject) research study and after school club, and the Philadelphia Community, School and College Partnership Research Project. The co-editor of What’s Race Got to do With It?: How Current School Reform Policy Maintains Racial and Economic Equality, he is the recipient of several research grants and fellowships.

The Director of the Center for Black Educator Development, Sharif El-Mekki has served as an administrator and teacher in Philadelphia schools for nearly three decades. The co-creator of The Fellowship—Black Male Educators for Social Justice, he was a 2013 U.S. Department of Education Principal Fellow Ambassador and an America Achieves Fellow. His other projects include Philly’s 7th Ward blog and the 8 Black Hands podcast.