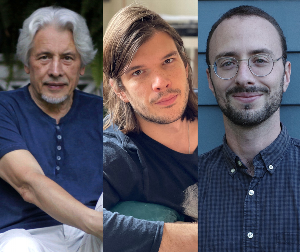 Vladimir Sorokin and Max Lawton | Telluria and Their Four Hearts

In conversation with Mark Krotov, publisher and editor of n+1

Vladimir Sorokin is one of contemporary Russian literature’s most popular writers. Banned by the Soviet Union, his numerous novels include The Queue, The Blizzard, Day of the Oprichnik, and the controversial Blue Lard. His work also includes several screenplays, plays, short story collections, art exhibitions, and an opera libretto, and his writing has been translated into more than 30 languages. The subject of a 2019 documentary and famed for his outspoken criticism of Vladimir Putin’s government, Sorokin has earned an O. Henry Award, the Andrei Bely Award for outstanding contributions to Russian literature, and a nomination for the Russian Booker Prize. His latest novel, Telluria, imagines a fractured future in which a holy war between Europe and Islam has sent the world spiraling into a state of feudalism and disarray.

Max Lawton has translated eight of Sorokin’s novels and has translated his stories for n+1 and The New Yorker. The recipient of the prestigious Clarendon Scholarship for the University of Oxford, he is also a novelist and musician.