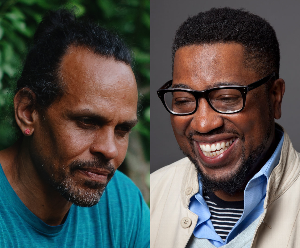 Ross Gay is the author of The Book of Delights, a life-affirming collection of short lyric essays that reminds readers to appreciate so-called ordinary wonders, even during turbulent times. His several volumes of poetry include Catalog of Unabashed Gratitude, winner of the 2015 National Book Critics Circle Award and the 2016 Kingsley Tufts Poetry Award; Be Holding, winner of the 2021 PEN America Jean Stein Book Award; and Bringing the Shovel Down. A writing professor at Indiana University, Gay has earned fellowships from the Guggenheim Foundation, the Bread Loaf Writer’s Conference, and Cave Canem. Inciting Joy explores the ways that people can inspire love and compassion by recognizing that which unites us.

Major Jackson is the Richard Dennis Green and Gold Professor at the University of Vermont, a core faculty member of the Bennington Writing Seminars, and the poetry editor of the Harvard Review. He is the author of five books of poetry, including The Absurd Man, Holding Company, and Leaving Saturn, and his work has appeared in The New Yorker, The Paris Review, and Ploughshares, among numerous other periodicals and journals. Jackson’s many honors include the Cave Canem Poetry Prize, a Whiting Writers’ Award, and fellowships from the Guggenheim Foundation and the National Endowment for the Arts. A Beat Beyond is a collection of essays, interviews, and notes that delve into the intellectual and spiritual aspects of poetry in order to understand its political, social, and emotional functions.